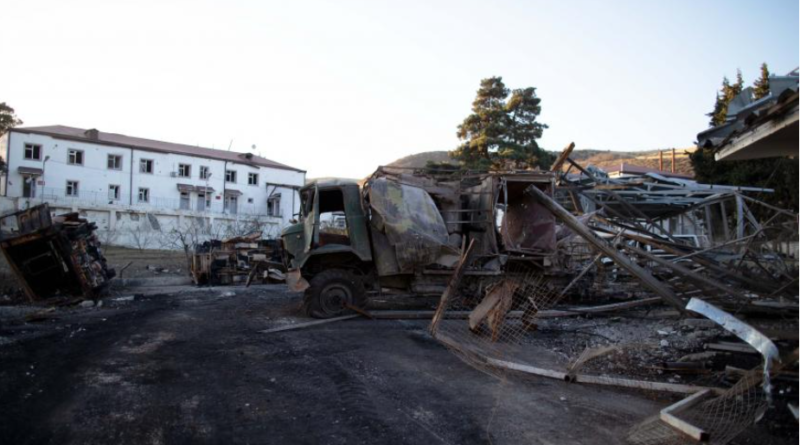 In February 2021, the American non-profit organization Human Rights Watch (HRW) published an article by the director of the European and Central Asian divisions of HRW, Hugh Williamson “Unlawful Attacks on Medical Facilities and Personnel in Nagorno-Karabakh“, in which he summed up the investigation of the attacks by Azerbaijani troops on medical facilities in the Armenian city of Martakert.

Williamson writes that satellite images less than 350 meters to the southwest of the military hospital show military positions before the start of hostilities, as well as the presence of an earthen embankment 150 meters away, but does not give any confirmation of his words. Quoting Williamson: “The study of the impact sites, the remnants of weapons and the proximity of the four points of impact suggests that the strike was carried out using a satellite version of the Israeli-supplied rocket artillery system called LAR-160 using EXTRA missiles. This missile is equipped with a unitary warhead containing 120 kg of explosives, and its manufacturer claims that high hit accuracy (circular probable deviation-less than 10 meters) can be achieved due to the possibility of satellite guidance of the missile. The accuracy of the LAR-160 suggests that the impact may have been intended.” It should be noted that the author himself emphasizes that the enemy, using high-precision weapons, was able to strike only at military facilities, but did not do so, opening aimed fire at a military hospital.

The article also shows the location of military facilities 250 meters to the east and 800 meters to the south of the Bazyan Martakert City Hospital on a satellite map.

HRW reports that the hospital was most intensively shelled on November 9 and 10 – the day of the signing of the trilateral statement on the ceasefire.

HRW staff visited the hospital on November 24 and noted significant damage to the hospital and the adjacent outpatient clinic as a result of the blast and fragmentations. In the courtyard of the hospital, numerous Grad fragments were seen, as well as cluster munitions of LAR-160 missiles, which are weapons of indiscriminate action banned by an international treaty – The Convention on Cluster Munitions.

The HRW report also states that based on the examination of the fragments and hit points, HRW concluded that the Azerbaijani units used “enhanced fragmentation” of Grad rockets, in which a layer of steel spheres is inserted between the explosive and the missile skin to maximize casualty-producing effect.

As a result of the shelling of medical institutions in Martakert, no one was killed or wounded at the time, and that’s only by chance. However, the responsibility for the crimes committed by Baku is not canceled, as is the accountability for the monstrous murder of 26-year-old Armenian doctor Sasha Rustamyan and the wounding of a 41-year-old driver who was driving an ambulance to pick up the wounded on the front line. Serious crimes must be unequivocally condemned by the international community and given wide publicity in order to prevent the occurrence of such precedents in the future and serve as a lesson to the criminal regime of President Ilham Aliyev.